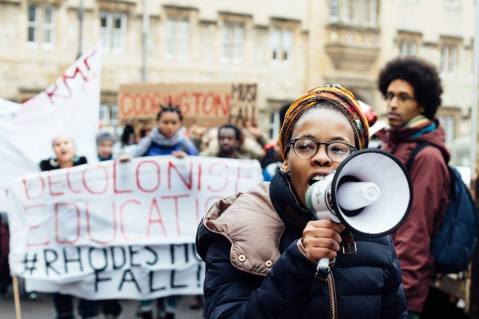 We of the ARTCoP send you greetings in salutation of your initiative in organising the Rhodes Must Fall March in Oxford. The ARTCoP deems it imperative to express critical support for your laudable initiative, more so since we see ourselves as developing grassroots community academic spaces into glocal sites of the unity of theory and practice to serve the liberation pedagogical purposes of the International Social Movement for Afrikan Reparations (ISMAR). As scholar-activists engaged in the battles of ideas about what kind of post-decolonisational reparations world order the ISMAR is trying to usher in, we have taken a keen interest in the work of the campaign to see Rhodes and his legacy fall at Oxford University in addition to your list of 7 demands.

We wholeheartedly support and commend those of you who have had the courage to question the status quo in these elite institutions of White Privilege. We are encouraged and hopeful given that you have taken the call for decolonisation from our Afrikan heritage communities and other Majority World peoples, and are now echoing them in these establishment miseducational spaces. However, in order to strengthen your efforts we invite you to consider how you can best connect your efforts to the wider decolonial movement beyond the campuses to effect and secure reparatory justice. We therefore urge that you seriously reflect on what you are trying to achieve and how you are trying to achieve it. In order to maximise impact, success and ultimately to embed your commendable efforts in the heart of those forces within and beyond the UK who can ensure that the critical mass is built it is important to sustain the campaign beyond reforms in the university establishment and on the campuses.

We invite you to consider what can be learned also from the efforts of the RMF Movement in Azania/South Afrika. For Azania/South Afrika is a place where student campaigners and organisers have extended their movement-building from the campuses to organically connect with communities of resistance that are the bedrock of the movement to ‘Stop the Maangamizi’ by accelerating the challenge to global apartheid and rectifying the harms of colonial and neocolonial forms of enslavement. In addition to effect and secure the redistribution of wealth and power within and beyond the broader Azanian/South Afrikan society. We would similarly urge that RMFO extend its demands and operations beyond securing educational reform in universities divorced from the wider context within and beyond the UK of ISMAR and its allied internationalist solidarity efforts of constituencies within the broader Peoples Reparations International Movement (PRIM).

Since history is best qualified to reward our research, we do not believe that that the Oxford University establishment will be compelled to make any significant changes and the demands you have made can be achieved by only organising on university campuses within Britain or across the world. In order to force the British/European establishment to concede significant measures of democratisation of education and more importantly to challenge Oxford for its maintenance of forms of structural and epistemic violence against the Majority Peoples of the world, much more linking needs to happen with the many and varied complimentary forces within and beyond the UK who must be mobilised to support your efforts.

The fight for decolonisation is going on in our communities across the world, and so to increase impact and the likelihood of success, it is important for you as mainly students activists and organisers to connect the fight you have taken up back into the glocal communities of decolonisational and reparations interest also located and represented here at the grassroots of Afrikan heritage communities of resistance in the UK.  We urge you to more systematically undertake forms of community engaged activism and movement-relevant research by qualitatively strengthening outreach from the campuses into communities. By doing so, you will be able to tap into the yet untapped mass potential of decolonial communities of reparations interest from below organising as part of the ISMAR and the PRIM, which is where the potential for securing your goals of decolonisation actually lie. By making these connections you will be able to maximise your impact by harnessing the power to effect decolonisation on our people’s terms rather than just what the Oxford University establishment is prepared to accommodate.

We humbly suggest that if this is not done your laudable efforts may become reduced to simplistic tokenistic gestures of diversifying the coloniality of White Power with cosmetic reforms, that leaves its genocidal substance intact. Ultimately, decolonisation is a matter of power and the coloniality of power will concede nothing unless it is counteracted with the overwhelming counter power of the masses of the colonised that you can be part of marshalling within and beyond the UK. For us it is a matter of counteracting the colonising White power with the liberating Black Power of the Wretched of the Earth. Ultimately, the fight you are waging is a political struggle which has to be waged by highly politicised and for that matter well-conscientised and dynamically mobilised social forces in order to help destabilise the status quo of structural and epistemic violence and compel progressive change in meeting the demands you have set.

We invite you once again to see yourselves as part of the building the ISMAR and the PRIM and for this movement-building to be victoriously consolidated in deploying the totality of our progressive forces against the bastions of the coloniality of power in and beyond the University of Oxford. We must never lose sight of the fact that decisions about Oxford University are not just made in Oxford or just by their so-called donors. These elitist universities are established in hegemonic forms of British law; by charters of parliament and run as state institutions. Accordingly, you should consider extending your campaigning efforts by linking up with others reparatory justice forces also seeking to challenge the British State who ultimately own and govern Oxford University as one of its most vital weapons for perpetrating not only mentacide but genocide and ecocide across the world. We invite you meet with us as the ARTCoP to deepen discussion around the issues we are raising in this statement so as to harmonise our efforts for more effective glocal impact.

We would also like to facilitate linking up your efforts with those formations that we think can be most helpful to achieving your purpose. We would like to highlight for your attention some of the formations that we think will be most helpful to you in this direction. They include, PARCOE, (Pan-Afrikan Reparations Coalition in Europe), GAPP (Global Afrikan Peoples Parliament), the PASCF (Pan-Afrikan Society Community Forum), ENGOCCAR (Europe-Wide Consultative Council for Afrikan Reparations) and the 1st August Afrikan Emancipation Day Reparations March Committee (AEDRMC). This year there will be, among others, a students and allies bloc on the 1st August Afrikan Emancipation Day Reparations March. We expect to see Rhodes Must Fall Oxforders and organisers join the various blocs that are most appropriate to you and also embed yourself in these wider struggles within and beyond Britain that are challenging state power. It is our view that only by doing so will victory be assured to us all.

On Behalf of the Afrikan Reparations Transnational Community of Practice