This is a link to some other position papers on CARICOM Reparations which predate but compliment the GAPP Position Paper. 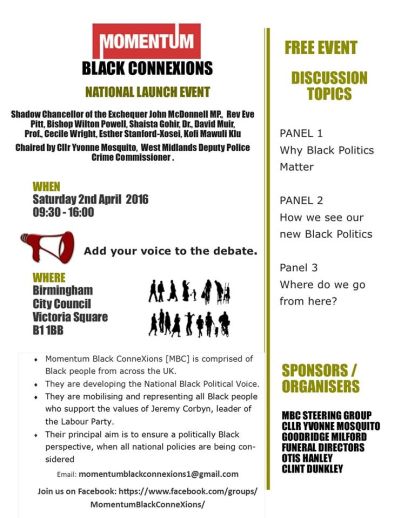 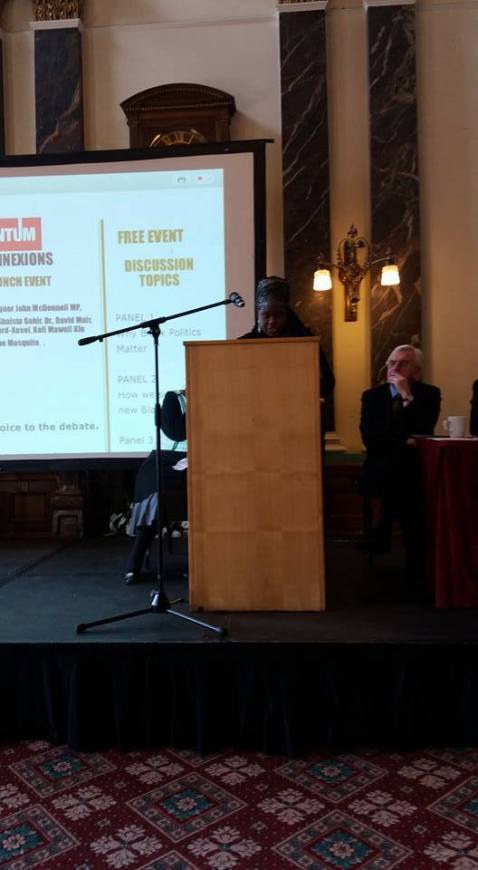 Saturday 2nd April was a significant day for members of the GAPP Leadership Facilitation Team who were strongly engaged in the launch of Momentum Black ConneXions (MBC) that took place in Birmingham, UK.

MBC is a grassroots structure which stands for Black Power politics via Black communities of resistance within the UK and abroad. Noting the principled organising and political formations of Black people around the wider labour movement in recent centuries, various black activists have grouped together, seeing that the current political landscape within the UK and upcoming 2020 elections as being an opportune time for awareness building around the issues we face as a global community.

For what could near enough be the first time within the Westminster (UK) voting system, an observation like never before has been made of the current Leader of the Opposition, Jeremy Corbyn (Labour Party). This is in relation to his 10-point policy, to which it’s felt our Black Power perspectives can be accelerated. Beyond words, Corbyn’s socialist principles place him beyond any political candidate vying for votes; given a track record that demonstrates his:

Through the contributions made by GAPP members during this MBC political interaction, we highlighted the importance of Sankofa, the African principle within multiple Akan based knowledge systems that looks into ‘visiting the best of our past actions in helping craft a fruitful future’ for Africans worldwide. This was also accompanied by works of the MBC’s youth wing (which GAPP support), who in their grouping conducted primary research analysing the political views, opinion and intent of Black youth.

An added benefit of our input to the event, was having John McDonnell MP (Shadow Chancellor of the Exchequer) present. He not only listened to and noted our community concerns, but also highlighted in writing the internal conflicts within his political party. In bringing about the ‘new politics’ that both him and comrade Jeremy Corbyn are pushing, John extended his comments around the importance of Black Labour Party members to be in attendance at branch meeting to influence and steer issues pertinent to their advancement; alongside the selection of candidates they deem best suited to promote their interests. Not directly using the words ‘self-determination’, John also spoke of how change must come from and be led by the black community first and foremost, and not so much via the advocacy of ‘middle aged, predominantly male and white’ politicians.

Speaking on the ‘How do we see our new Black politics’ panel, a PARCOE (Pan-Afrikan Reparations Coalition in Europe) spokesperson introduced the ‘Stop the Maangamizi: We Charge Genocide/Ecocide’ Petition elaborating its relevance to the work of MBC and Momentum, the network of people and organisations to continue the energy and enthusiasm of Jeremy Corbyn’s campaign. The PARCOE spokesperson drew attention to Jeremy Corbyn’s expression of willingness to continue engaging with the issue of Afrikan reparations. John McDonnell was asked about which existing organisational processes within the Labour Party need to be engaged with to further action on the demand for an All-Party Parliamentary Commission of Inquiry contained in the SMWCGE Petition, what steps of action he recommended to progress action on this?, and what steps he would as an MP take now that he has been made formally aware of this proposal? Mc Donnell’s response was that even this is a difficult issue to get the Labour Party to engage with, the position of himself and Jeremy Corbyn in support of reparations is clear because they have been engaging with activists of the Afrikan reparations cause for quite some time. He reiterated the importance of Afrikan people pressing on with their work and finding various ways and means of engaging with the Labour Party and the wider Labour Movement on this issue and providing himself and Jeremy Corbyn with the necessary information on the relevant activities.

With cautious enthusiasm over what is to happen in the upcoming years, GAPP members who presented via their respective organisations took heed to the struggles we must face internally within the Black Community. It is only in overcoming these challenges, that we’ll truly bring to light the ‘straight talking, honest politics’ (which Jeremy Corbyn speaks of) that is void of the mistakes which we’ve made and continue to make, even during the times we’ve gained and claimed victories.

See a transcript of the speech made by Esther Stanford-Xosei at MBC here.

We are shocked and outraged to learn of the brutal murder of the chairperson of Amadiba Crisis Committee, Sikhosiphi Bazooka Rhadebe. As chair of the ACC, Bazooka Rhadebe was helping lead the struggle of Amadiba residents on the Wild Coast in opposing open-cast titanium mining by the Australian mining company MRC.

According to Amadiba Crisis Committee: “The hitmen came in a white Polo with a rotating blue lamp on the roof. Two men knocked at the door saying they were the police. Mr Rhadebe was shot with 8 bullets in the head.”

This is not the first case of intimidation or violence against those who have opposed mining in the area.

Our hearts go out to Bazooka’s family and community.

The assassination of Bazooka is a painful reminder that from abaHlali baseMjondolo to the Helen Suzman Foundation, there is an existing pattern of criminal attacks on civil society formations, especially those in townships, informal settlements and rural areas. For years, poor people’s movements in different parts of the country have experienced regular harassment, intimidation, detention and violence against their members. It is worst felt when the media are far away and the victims are poor, black or rural, and when major industries stand to make billions in profit.

We cannot afford to remain silent in the face of any of these attacks. Every one of them is an attack on democracy itself.

1.    We call for the speedy arrest and successful prosecution of the killers of comrade Bazooka.

2.    We further call on the Human Rights Commission to investigate the systematic process of intimidation that has been orchestrated against those who have stood up against MRC and its lackeys in the area.

3.    We demand that the Minister of Mineral Resources suspends all mining  applications until there has been a full and independent investigation of Rhadebe’s murder!

4.    We demand protection for all members of the Amadiba Crisis Committee and their families!

5.    We call on all progressive forces to stand up in defence of democracy.  End the attacks on our activists and movements!

We will not be bullied and intend to speak out even more strongly than before. The key thing when civil society is being intimidated is to show no fear.

Contribute to the Solidarity Fund: The Amadiba Crisis Committee (ACC) urgently requires funds to assist Bazooka’s family, for transport, and for continuing the struggle and protecting activists in this dangerous moment. You can make donations to the following bank account. Please include the reference as ‘Bazooka Cause’. Please also forward this request for financial assistance on to your networks as well as funding agencies that may be willing to support the ACC.

The Global Afrikan People’s Parliament in United Kingdom (GAPP-UK) was strongly represented at an Internationalist Solidarity networking meeting with a visiting Leadership Delegation of the Economic Freedom Fighters (EFF) of South Africa at the School of Oriental and African Studies (SOAS), University of London, on Saturday, 28th November 2015. The meeting, which resulted from discussions and planning going on for some considerable time between interested parties, was presided over by Brother-Fighter Dali Mpofu, the EFF Chair, Brother-Fighter Floyd Nyiko Shivambu, the EFF Vice-President and Member of both the South African Parliament and the Pan-African Parliament (PAP), as well as Sister-Fighter Nkagisang Poppy Mokgosi, an EFF Member of the South African Parliament. It was facilitated by Kofi Mawuli Klu, a Co-Vice-Chair of the Pan-Afrikan Reparations Coalition in Europe (PARCOE) and a member of the Leadership Facilitation Team (LFT) of GAPP-UK. After kick-starting propositions by Dali, Floyd, Nkagisang, Brian Kwoba, Esther Stanford-Xosei and Kofi, followed by discussions involving a good number of participants, the meeting endorsed the establishment of an Economic Freedom Fighters Internationalist Solidarity Action Command (EFFISAC), to be organised and coordinated from London, United Kingdom. It was agreed that a South African-led EFF Support Group that is organising itself in Britain into a local party branch of the EFF Abroad will also be an autonomous integral part of the EFFISAC.

Building strong relations with the EFF of South Africa and similar radical contingents of the resurgent Pan-Afrikan Liberation movement at home and abroad is a vital part of the Glocal Activism element in the Strategic Organisational Plan of the GAPP-UK, with particular regard to its relevant cardinal action points such as the PANAFRIKAMAYIBUYE Pan-Afrikan Liberation Movement Global Revival Action Learning Safaris (PANAFRIKAMAYIBUYE-PALMGRALS) and the All-Afrikan People’s Global Lobby for Unity Solutions (AAPGLUS). Hence the highlighting in the meeting of some of the priority campaigning endeavours of our Afrikan Heritage Community for National Self-Determination (AHC-NSD) in Britain such as the urgent need to give stronger internationalist solidarity push to the STOP THE MAANGAMIZI: We Charge Genocide/Ecocide Campaign and its accompanying Petition as an imperative for enhancing the massive glocal building of the International Social Movement for Afrikan Reparations (ISMAR) as one of the most dynamic galvanizing columns of the Peoples’ Reparations International Movement (PRIM). Activists of the GAPP-UK in the meeting also impressed upon the Delegation our request through the EFFISAC to the EFF Leadership to officially mandate Brother-Fighter Floyd Nyiko Shivambu to serve as the ISMAR/PRIM Chief Liaison Facilitator in the Pan-Afrikan Parliament and also to help us promote in and beyond the PAP our demand and glocal lobbying for a Pan-Afrikan Reparatory Justice Law of Holistic Rematriation/Repatriation (PARJLOHRR).
For more about the EFFISAC check, like and share its Facebook page at:
https://www.facebook.com/EFF-Internationalist-Solidarity-Action-Command-202899090055831/